We buy and sell rare, collectable, and second-hand books of all kinds. Our gallery space hosts Typewronger Books, offering new books and secondhand typewriters. We are the oldest second-hand and antiquarian bookshop in Scotland, and the only open shop in Edinburgh to be a member of the Antiquarian Booksellers Association, the oldest trade body in the antiquarian book world. This website lists a selection from our rare, antiquarian, and collectable books, while our shop also contains thousands of second-hand books which are not listed on the internet at all.

As members in good standing of the ABA we uphold their code of fair dealing, the strongest in the book trade.

If you are looking to sell books, please visit the Contact Us page for more information on our buying policies. 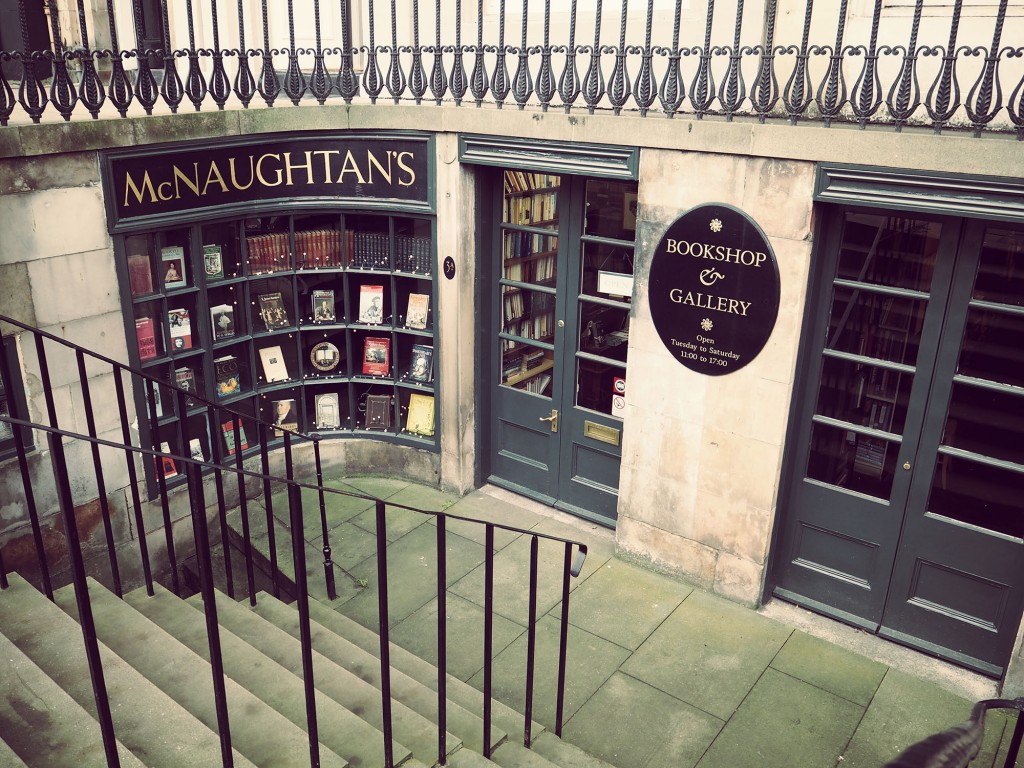 McNaughtan’s Bookshop was opened by Major John and Mrs Marjorie McNaughtan, following the Major’s retirement from the army. After renting premises for a brief time they bought number 3a Haddington Place in 1957 and slowly built the shop’s reputation as one of the best places to buy or sell books in Edinburgh. The Major fell ill and died in 1972, and Mrs McNaughtan continued to run the business on her own until she retired in 1979 and sold the business to her assistant, Elizabeth Strong.

In 2015 Elizabeth retired and the shop was taken on by Derek Walker and Anna Fomicheva, formerly of Blackwell’s in Oxford.

The premises are two of the ‘laigh’ (or low) shops in an 1825 Edinburgh New Town tenement building, designed by Robert Brown (who also assisted Robert Reid with the Signet Library), and Grade A listed by Historic Scotland. The building is important as one of the few extant elements of a large estate plan by the descendants of John Hope, professor of Botany, for land that had formerly been part of the botanic gardens before their 1820 move to Inverleith. The plan was derailed by the ascendance of the West End as a more fashionable location and only numbers 1-8 of the Haddington Place buildings were completed.

In 1957 when the McNaughtans bought number 3a, it was full of refrigeration equipment which they had to clear before the space could be converted into a bookshop. Shelves were installed piecemeal as they were acquired at the lane sales of local auctioneers, though the entire middle room was fitted with uniform shelving from the Dunlops’ bookshop on George IV Bridge, which was then closing. A few years after Elizabeth took over, the opportunity arose to acquire the adjacent premises (formerly a betting shop) and McNaughtan’s expanded to nearly double its original size. In 2010 part of number 4a was converted into a bespoke gallery space.

As a basement premises in a listed building unfortunately we are unable to provide wheelchair access to the shop.